Warm Oil and Creosote on a Hot Summer Day

Those are smells I like.  They take me back to my youth when I would ride my bike around by the Rocket gas station downtown.  The service station had an outside rack for doing oil changes on cars, and back then they didn't have the environmental restrictions about disposing of used motor oil properly so they would let it sit in buckets outdoors and then every so often would pour the oil on the dirt that surrounded the sides and back of the station to keep dust down.

My dad used to do all the oil changes on our cars at home, and would always pour the old oil out along the fence to keep down weeds.

The smell was a good one to me.  Like creosote in railroad ties on a hot day.  Even better was the mixed smells of oil and lube grease and creosote...  even in the early 1980's environmental handling of oil was not mainstream yet - here's a photo of the locomotive fueling area in east Portland at the Portland Traction Company's yard. 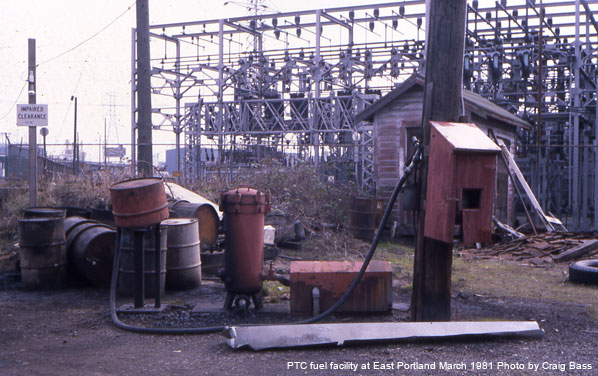 The "fragrance" also reminds me of when I was driving dump truck for Robert Osborne Trucking out of Newberg, Oregon and would occasionally deliver sand to the Portland Terminal Railroad's sand house next to their roundhouse in northwest Portland.  When there are wet rails or when they start with a heavy train, railroads use sand to add traction to locomotive wheels and avoid the wheels slipping - and most railroad engine service areas had sand houses where sand was stored then piped up to a tower that had a hose that a crew member would use to fill the sand tanks on locomotives.

No sand tower?  No sand house?  No problem; sand comes in bags, too: 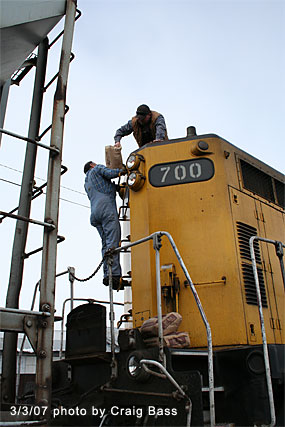 Warm oil and creosote on a hot day also takes me back to when I visited the Western Pacific Railroad Museum in Portola, California one summer day.  The aroma was prevalent all over the museum's collection of locomotives and in the engine house.

For that matter, warm creosote smells take me back to when I was a kid skipping school in first grade and would ride my bike up and down along the railroad tracks of the branch line that went into the town we lived in.

I love those smells.  Hot roofing tar and hot asphalt as well.  I'm weird that way.

Hot tar reminds of Oak Hill Elementary School in the suburbs of Jacksonville, Florida being re-roofed in the late 1960's when I was in the fourth or fifth grade.