Sailing - My Only Trophy

The year was ~1968.  We were living in a suburb of Jacksonville, Florida and my dad was a Marine stationed at Naval Air Station Jacksonville.  For whatever reason, he decided to register me in a youth sailing class through Base Special Services at Mulberry Cove Marina.

There were about fifteen or twenty kids in the class, and I really enjoyed learning to sail.  First, we all had to pass a swimming proficiency test at the base swimming pool (not the "officer's swimming pool, as my dad always referred to the sewage treatment plant on base), which I had no problem with.  Then there was instruction on using flotation devices, dock safety, knot tying, rules of the road regarding things like right of way, what different buoys signified and so forth.

We learned about sails and centerboards and daggerboards and transoms and rudders and telltales and helms.  Then we actually got to get into boats and raise the sails.  Or, sail, singular, as the boats we started in were little fiberglass boats called "prams" (also called "sabots") that only had one sail.  A pram was really a one-person boat, but capable of carrying at least three, so three of us were crewed to each pram and we took turns at the helm.  We'd practice tying the boat to the dock cleats, casting off, turning and tacking and running with the wind.

After we were getting good at sailing the prams, we moved up into sloop-rigged boats.  These were larger and had two sails: a mainsail and a jib and were a lot more fun.

On the last day of the class they held a "NAS Jr. Sailing Regatta" - a boat race.  The course was triangular, with a starting point between two buoys, a run up the St. John's River about a mile to another buoy where we would make a left turn around the buoy and head back upwind to round another buoy, then back to the starting line for the finish.

Lots of family members of the student sailors had shown up for the race and lined the shore and docks of the marina - it was an exciting event for me.  My mom and two younger brothers had come out onto the dock to wish me and my crew well, and we pushed off.  My brother Robert thought he would be helpful and bent down to help push the boat away from the dock, but forgot to let go.  There I was yelling at him to "let go, let go," and my mom was yelling "hang on, hang on" and the inevitable splash ensued as he ended up over stretched between the dock and the boat and landed with a flop into the water.

There were several heats as crew beat crew until there were two left; mine was one of the finalists.  The other boat rammed us at the starting line and we won by default.

And thus I was awarded the only trophy I've ever won. 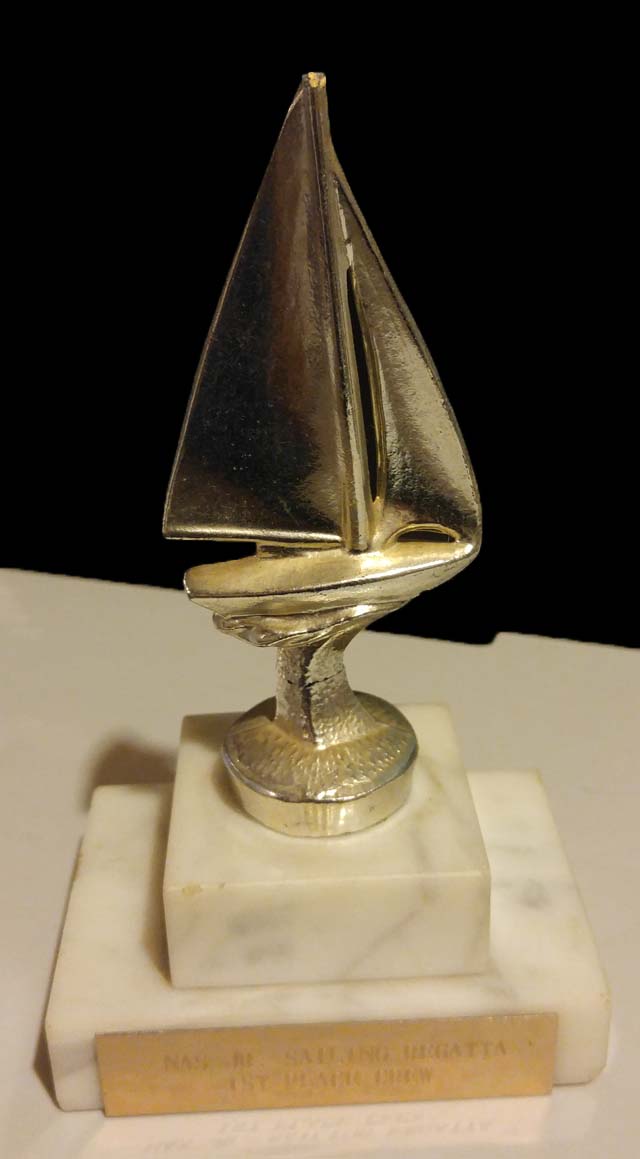