The Road To Kelso

Finally I reach the crest of those 'mountains' and begin to drop into a wide valley, a basin, just as the sun sets, sending fiery pink and orange and red and purple hues onto the foothills of the desert around me. The shadow of my '76 Corolla stretches long beside me, racing me. In the distance, at the bottom of the basin, I see a mirage-like apparition, out of place in the middle of the vast and barren desert, an oasis of large-lush-green-trees; tall silver water tanks towering over a small settlement reflecting the sunset's ebbing glow, and a tiny point of blinking red light; a sentinel.  Kelso. 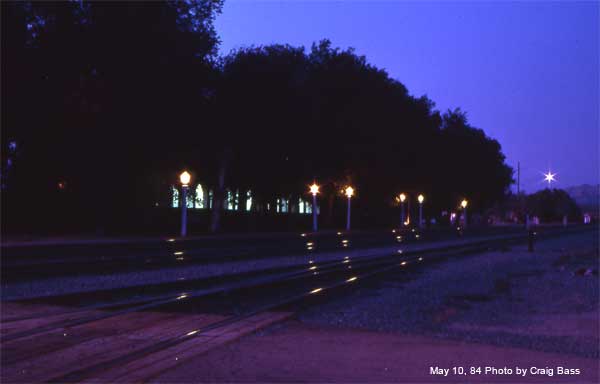 As I grow closer, I can make out the thin line of the Union Pacific Railroad main line piercing the oasis. The line stretches to infinity in the east, disappears behind a long, low sand dune to the west. The flashing red light gets more distinct as I near; two miles to go and I can see the stop sign. I ease off the gas and coast the last half mile into Kelso, my view of the small oasis expanding to include a few mobile homes, some disintegrating brick buildings, assorted outbuildings and that inappropriate mass of huge green trees. Closer and closer in the fading glow, the sentinel's red light flashing bright and steady. I ease to a stop at the red stop sign.

"STOP." "5 TRACKS." "HIGH SPEED TRAINS" on a yellow diamond-shaped sign mounted below the crossbuck of a railroad crossing sign. 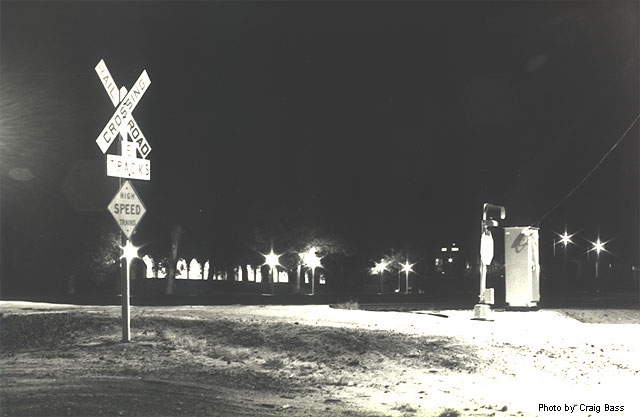 I look both ways and prepare to skitter across the tracks but the depot in the cottonwood trees to the left grabs my attention. I ease across the tracks, then turn left on the dirt road and slowly drive, the rows of railroad families' mobile homes with a scattering of human activity around barbeque grills and fences watching me suspiciously and talking together nursing beer cans while their dogs chase my car's progress and bark inside their chain link worlds to my right and the steel mainline rests to my left. A few scattered freight cars, a complete set of crew cars for a work train sit with air conditioners running, plugged into an electric pole on a siding near the water tanks. 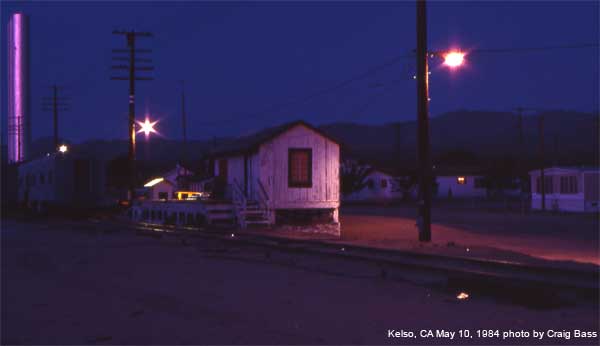 Across the tracks, hidden in those trees, sits the Kelso station. Ornate. Grand. Mission Style and huge, polished as if expecting the City of Los Angeles to pull up and discharge its passengers at any moment. A station befitting the majestic Streamliners of Union Pacific's heyday. I turn around and retrace my path until I can drive across the tracks again, then turn toward the station on the frontage road. Brick walkways, gas-style lamp posts glowing in the darkening evening, a soft green well-maintained lawn spreading under the shielding canopy of cottonwoods. A park-like scene right out of Main Street, U.S.A.

A few other buildings line this side of the tracks: a worn out and fading block-walled Kelso Post Office and a tumble-down ruin with faded lettering marking it as a grocery and maybe a former gas station and a few small metal railroad-oriented utility buildings, but my attention is continually drawn to and focused on that station. Union Station in Los Angeles is not this well maintained; why would such an artifact be in such good condition out here in the middle of nowhere? 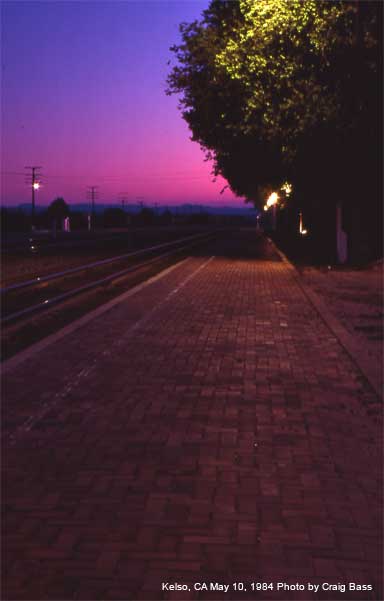 This is the object of my drive. It has been my goal to see this station that I've heard rumors about. I set up my tripod and get one or two pictures in the fading purple, and now it is full-on dark. A mother in a mobile home across the tracks calls her bicycling children in to baths, and the dogs have long since settled down. I drive across the tracks again and park kitty-corner from the station, hoping the residents of Kelso don't mind an overnight guest parked nearby.

Having no pressing plans, I settle down for the night. I am not accustomed to sleeping in my car, but the setting is so serene it beckons me to relax and enjoy its quiet beauty.  I soon drift off.

11:00 P.M. A low, ominous sound awakens me. I feel it more than hear it at first, but then I know I hear it. It grows in intensity, a deep bass rumble. Louder and louder, more powerful with each passing minute. It takes twenty minutes before I really recognize it as an approaching train, diesels throbbing in the night, but I can't tell which way it's coming from. Then, headlights blazing from the east, it roars through Kelso. Must be doing at least 80. Westbound. Three SD40-2's and a mile of automobile rack cars and covered hoppers glide smoothly past on welded rail then clatter over the siding switch down the tracks on their urgent way toward Los Angeles, flashing red light on the rear disappearing down the endless track, reflecting off polished silver rails. The entire setting seems ethereal. The drive was worth it for a railfan such as I. 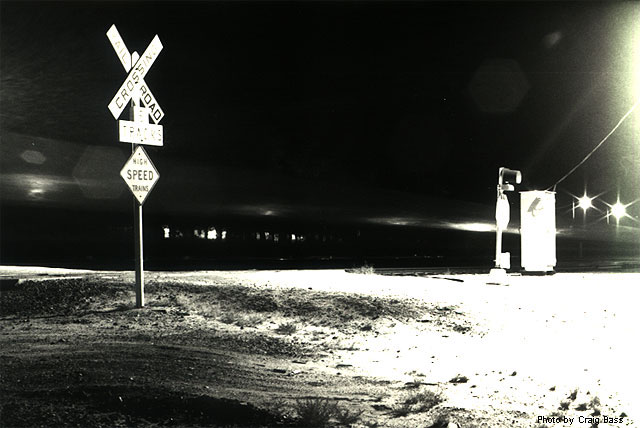 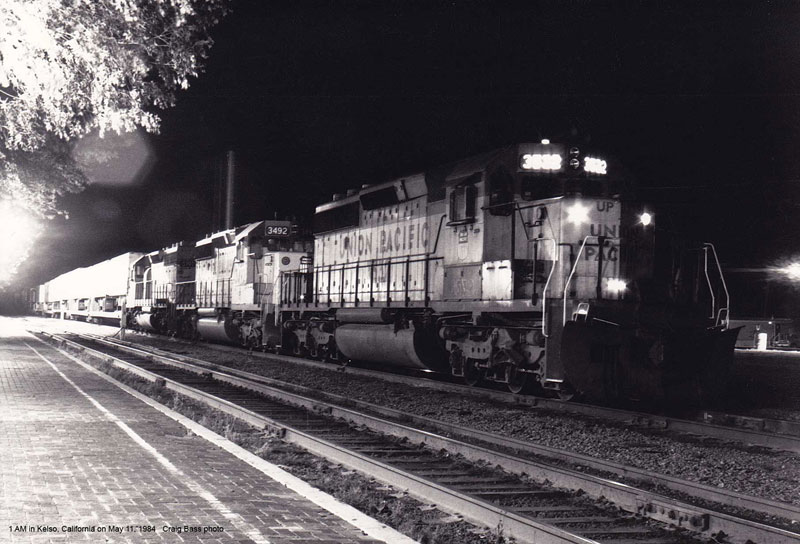