Let Me Tell You About Taking The First Job Offered

I take you back now to to the early 1980's.  My wife, toddler daughter, and I had just moved to southern California from Oregon, where I had had a decent job driving a dump truck.  Business had dropped off with the Oregon economy and I hadn't been getting many hours working, so we had decided to make the move.

At this point I had about four years' worth of truck driving experience, one speeding ticket and an Oregon Class 1 commercial driver's license (predecessor to the current Class A license).  We made the move by faith, with no job lined up to go into when we got to southern California, and at first we camped out in a travel trailer at my parents' home in Fallbrook.

There weren't a lot of jobs advertised.  California DMV would not accept my Oregon CDL when I applied for a California CDL, requiring me to take a driving test before issuing the CDL, so I ended up with a learner's permit as I had no truck/trailer to drive for the test.  This made getting a job more difficult, but...

... I contacted a company in San Marcos who needed a transfer dump truck driver and the owner told me to come in and ride with him for a day and he'd see if I could do the job. They were really busy and being a driver short meant he was out in a truck when he'd rather be in the office and landing more work.

So, one morning I met him at their yard and rode with him until about noon, then he had me take over the driving.  That lasted for about an hour when he said I was hired and had me drop him off at the office. Bear in mind I had never driving a transfer dump before (a dump truck pulling a dump trailer).  "But what about my learner's permit?" I asked.  He said first chance he got he'd send me to the DMV with my truck and trailer and I could get the CDL.

The pay was $8 per hour, which at that time was pretty good for a new hire, the truck was a 1975 GMC General (8v71 Detroit Diesel, 13 speed transmission, Likens dump body, trailer and transfer box) that had probably never felt the touch of a wash brush since it left the factory, but it was a pretty good truck and I was comfortable with it.  Starting time was 5 am and we worked until the day's work was finished, which was sometimes 8 pm.  Oh, did you know that truck drivers were exempt from federal overtime wage laws?   Unless you were a union member, which I wasn't, and worked a union job for a company, which I didn't, or for a company that cared, which I... 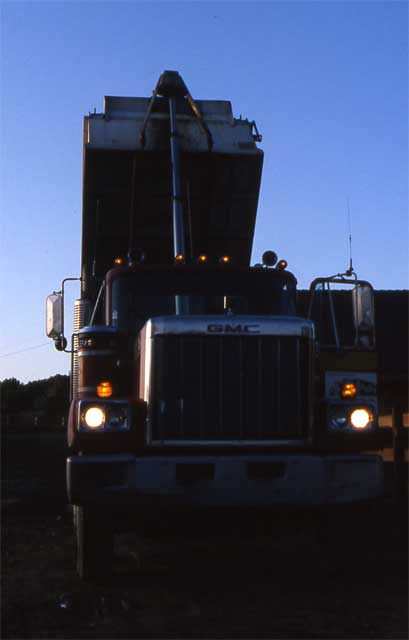 Well, for instance, one Wednesday I was going through a left-hand curve and felt a pop and the right side of the truck dropped a bit.  I stopped and did a quick inspection, to find that the right-hand main leaf of the rear suspension of the truck had snapped in half.  I radioed in and told the boss, expecting him to send out a repair truck with a new spring, but instead was told to run it until Saturday and they'd get it fixed.  Such was the boss's caring about safety, anyway. 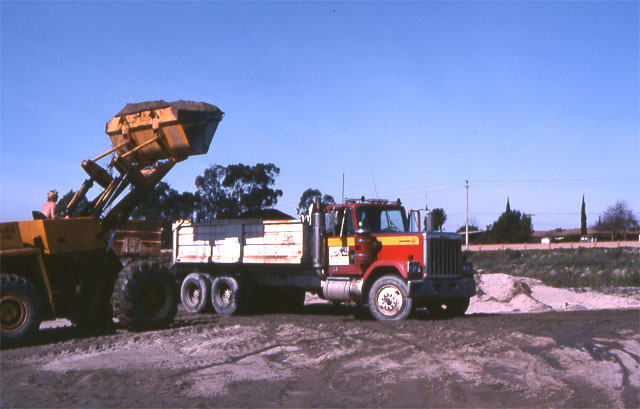 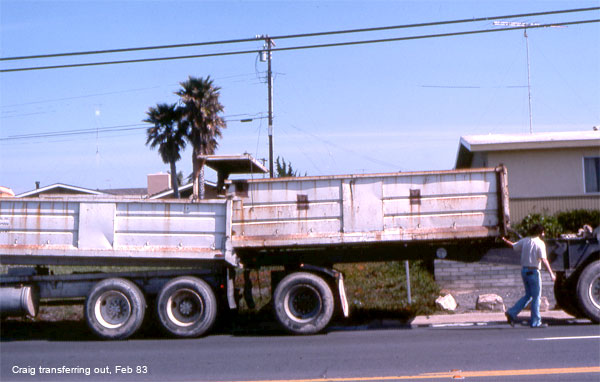 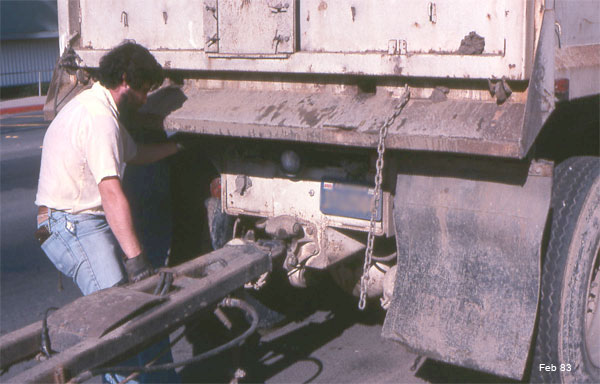 Things did improve though when I was assigned to a better truck.  A 71 Kenworth W900 with a Likens body and transfer trailer/box, powered by a 350 Cummins with a 13 speed transmission and having a Peterbilt air-ride rear suspension.  It was a great truck, owned by a private individual and leased to the company for which I was working.

Several years later I would drive that same truck, but this time for its owner, hauling all kinds of bulk commodities and hazardous waste dirt in seven western states, but that's a different story.   In the meantime, I drove for this company for about 18 months before taking a job driving a set of doubles for a wholesale nursery.

Oh, my CDL?  Yeah, after about three months there was finally a break in the day long enough for me to swing by the Escondido DMV office and take the driving test and get my CDL.  They didn't even question where the licensed driver was that I was supposed to have with me...

I was younger then - and in better shape.