Memories Of A Trip To Phoenix

In November of 2009, my wife and I took a trip to Phoenix, Arizona in our then-motorhome, a 1990 Winnebago LeSharo, which we had named "Le Shuttlecraft" due to its visual similarity (to me) of a Shuttlecraft from the original Star Trek television series.  For those who don't know, a LeSharo was a small Class C motorhome based on the Renault Trafic (one f) light commercial van.  As such, it had a 2.2 litre Renault 4 cylinder engine and a Renault drive train.  It got GREAT gas mileage for an RV (we're talking 15 around town and 21 on the highway vs. the 9/9 that our current motorhome gets), but the engine was the LeSharo's ultimate downfall.

What follows is a log posting I made to a LeSharo forum about that Phoenix trip.  I hope you will enjoy it!

Hello from Phoenix, Arizona. We made it, but not without adventure. We left Klamath Falls almost on schedule at 9:45 pm. Le Shuttlecraft was running great for our mad dash south (no time to take a relaxing trip this time; gotta be there quickly). I spaced fuel stops in such a way as to refuel before the needle got very far below half tank.

70 miles out of Klamath Falls, our speedometer quit working. Which caused the cruise control to quit working (although I found out several hundred miles later that it still worked - it had just shut off when the speedo cable snapped). The cable bird-nested right at the speedometer head, breaking off part of the plastic retaining clip with it.

Le Shuttlecraft quite literally hummed through the night whilst my wife and my sister-in-law slept and I drove.

Made a fuel stop in Alturas, California and headed south on 395. Our next fuel stop was Hallelujia Junction, almost to the California/Nevada border. Added a quart of oil there as well.

At Reno, Nevada we headed east on I-80. Next fuel stop was Fallon, Nevada, then took highway 95 south into the Nevada interior. It was a beautiful night with clear skies and a full moon to light our way. Very little traffic out there that time of the night; we may have only met 20 vehicles between Fallon and Hawthorne.

We stopped for a break and breakfast in Hawthorne as the sun was rising.

At Tonopah, Nevada, we followed signs off of the main drag to the Rebel fuel distributor for the cheapest fuel purchase of the trip: $2.699 per gallon. Very interesting towns in the Nevadan interior, I hope someday to be able to take my time and explore them. Lots of history here.

I slept while my wife drove from Tonopah to our next fuel stop at Beatty. Had to add two quarts of oil at Beatty.

We were enjoying our drive through the desert of Nevada when, about 35 miles south of Beatty, I noticed the temp gauge climbing quickly. I pulled to the shoulder and shut off the engine before it overheated. Steam was coming out from under the hood by the time I got out of Le Shuttlecraft.

A quick inspection determined that the L-shaped hose that goes from the thermostat housing to the metal pipe that runs behind the exhaust manifold had ruptured. Note to self- carry replacements for the odd shaped/sized hoses in the future.

Fortunately we had a strong cell phone signal out there on the desert, and after the usual drill with AAA on the phone they dispatched a flat bed tow truck out of Las Vegas, about 80 miles south of us.

All told, we were on the shoulder four hours. 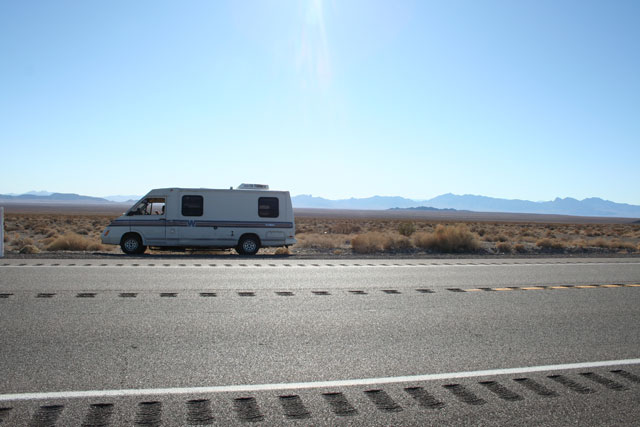 While waiting for the tow truck, I used the Auto Services function of our GPS to find numbers to call in Las Vegas to try and locate a replacement hose. No luck was to be had; invariably when I explained the size and shape of the hose (short, L shaped, approx 5/8" on one end and 3/4" on the other and the possible applications that it might be listed under) nobody stocked anything like it.

Of course they all said that if I could bring the hose in they could find it by comparison; the closest parts store that offered at least that hope was in Pahrump. I could actually see Pahrump from where we were sitting - glistening as it rested about 30 or so miles away on the valley floor.

So I placed a call to Mobility RV (U.S. based parts supplier for obsolete Winnebagos), but at that time it was just after closing time back in Iowa so no soap there either.

Just then the tow truck arrived. Antonio, the driver, looked at the hose and said that it should be no problem to find a replacement. He had us picked up and chained down in no time. I decided there was a better chance of getting the hose in Las Vegas as opposed to Pahrump, so that's where he pointed the tow truck. I called Al back at the Pahrump auto parts store to let him know, so he wasn't waiting around for me. He appreciated that.

A few miles south we were stopped at a construction zone for about half an hour waiting for the escort car. While waiting, Antonio called a friend of his who owns 5 Star Auto Repair on West Sahara Avenue in Las Vegas.

Antonio described the situation to his friend (I wish I could remember his name; I'm lousy with names), who agreed to keep his shop open and his best mechanic there until we arrived (normally closing at 6pm).

We ended up making good time, getting to the shop at a little after 5:30. Total towed mileage was 77 - well under the 100 mile limit of my AAA Plus coverage. Once again, my AAA membership has paid for itself.

After looking at the hose, I was told that it would be no problem and I should be good to go in half an hour. It didn't take much longer than that; the first hose they bought didn't fit so it took them a little time to track down the right hose but by 6:30 we were back on the road with a new hose and a freshly refilled-and-bled cooling system.

I give Five Star Auto Repair 5 stars for their willingness to rush the job through for us, and their friendliness and professionalism. That's Five Star Auto Repair, 6396 West Sahara Avenue, Las Vegas Nevada, 702-304-2000. Tell them Craig sent you.  Not that they will remember me...

While we were waiting for the hose, my niece Nichole, who lives in Las Vegas, brought her son Jason down to meet us and take us out to eat. I stayed with the Le Shuttlecraft while they all went across the street to a restaurant, where I met them after the repair was finished.  (As an aside, when Nichole walked past the mechanic and me to greet my wife, the mechanic looked at me and said "Niiiice!"  I replied "Niece!"  His look was that of a kid whose hand had been caught in a cookie jar!)

We had the option of spending the night at my niece and nephew-in-law's apartment, but I was anxious to get back on the road and to our destination. We took a vote and decided to press on. No need to top off the tank in Vegas - the stretch between Beatty and Las Vegas was our best mileage of the entire trip for some reason (!).

At Boulder City I decided to bypass Hoover Dam and headed south on highway 93. This was a decision based solely on the inconvenience of having to unload all the baggage for the dam's security checkpoint (this was before they opened the new bridge), but it worked out well for us as it gave us a chance to stop in Searchlight and re-bleed and top off the cooling system. Pretty sure I've got a little head gasket leak.  Well, the Shuttlecraft has, not me.  Although, one never really knows, does one?

I'm not sure what the consequence of having any air in the system is, but I don't want to risk it. That being said, I'm not sure if I ever got it totally bled. Trying to keep the bottle attached properly with the bungee cords that it is equipped with kicked my can -- surely there are supposed to be some kind of bracket straps to hold it in place???

Also took on fuel and about a two hour nap while in Searchlight. Unfortunately, a new problem began to show its ugly head in Searchlight; when I started the engine the starter made lots of ugly noises like it was dragging. But it started, then it was on the road again while my wife and sister-in-law slept peacefully.

We cut across the Arizona border at Laughlin to Bullhead City and made Kingman, Arizona our next stop for fuel and refreshment.

The starter noise was a little worse when I started the engine.

After leaving Kingman, my wife drove almost to Wickenburg while I slept. Approaching Wickenburg I again resumed the driving duties as the sun rose over the eastern horizon.

A quick potty stop in Wickenburg and it was on to Phoenix, where we arrived at approximately 9:30 am local time with a quarter tank of fuel left.

The starter noise is much worse and it is dragging a bit more now. I hope it makes it until we get back home; however, I'd rather err on the side of caution.  I'll replace it in Phoenix.

We left Phoenix in good shape. Got as far as Alturas, California on the way home but... alas... looks like a cracked or warped head or the head gasket finally blew. I had noticed steam out the exhaust pipe when we left Susanville, CA after a dinner stop, but just presumed it was because it was awfully cold outside.

We ended up moteled in Alturas for the night and the next day had AAA tow the Shuttlecraft back to Klamath Falls where our mechanic made the determination that I described in the previous paragraph. 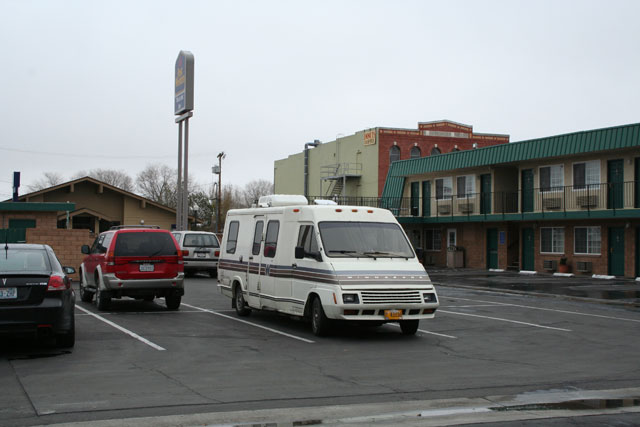 So... got the Shuttlecraft home, parked in the yard and there she sits.  We can't afford to pour any more money into it... but wait, several months later I saw an ad for a product called "SteelSeal" that was guaranteed to be a head gasket in a can... so yeah, I poured enough money out to buy it and pour it into the cooling system and voila, it worked!  Got us another 2,000 miles or so before it gave up, but for the price it was worth it.  The second treatment (free, under their guarantee) only lasted about 500 miles.

Eventually, we sold Le Shuttlecraft.  Not so much because of the head gasket issue, but rather a gear in the final drive started making noise indicating an expensive drive train repair that I just didn't want to tackle.