Memories Of Bus 32, Sunkist On The Tree, And Living On Barhaven Lane

My dad bought a house on Barhaven Lane just before leaving on his second tour of Viet Nam. We had our own backyard with a basketball hoop, a pepper tree and a row of tangerine and orange trees in the tiered front yard, a grapefruit and a lemon tree in the side yard, a bank covered with iceplant and planters filled with bougainvilleas and geraniums, and lots of room to play, indoors and out. (Funny thing about those citrus trees . . . when I was in high school two of my female friends, Julie and Pat, had come by to visit and apparently I was not home or something, because they took the time to write "Sunkist" on a whole bunch of fruit in our front yard!)

My brothers and I would walk to the end of the street to catch the school bus. We rode bus number 32 – the driver was Mr. Sims. 32 and its twin #31 were old (even at that time) gasoline-powered International Harvester buses with Wayne (I think) bodies. Don’t really remember all that much about riding number 32, except that it “farted” out the tail pipe whenever Mr. Sims would shift gears. I found out that I could (and still can, because I just now did it) make the same noise by blowing air out through my loosely closed lips and letting them vibrate.

Bus 32 appears in one of the home movies that my mom took of us leaving for our first day of school – me in my second year of third grade and my brothers in first. It shows us sitting on the boulder at the end of the lane waiting for the bus, the bus pulling up with its red lights flashing... 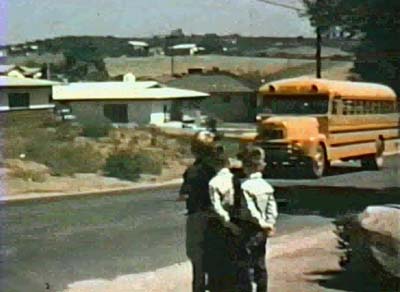 ...Mr. Sims getting out of the bus, walking around the front of it and standing in the middle of Alvarado Street to make sure we were safe when we crossed the street, us crossing the street, us getting on the bus, the bus driving away with us at the windows, waving . . . and then the movie shows us coming back home in the afternoon, my brothers running toward the camera with cards pinned to their shirts that had the bus number on it to ensure that they got on the right bus.

Across the street from our house back then was a big open field that sloped down to a small creek before sloping back up on the far side along La Paloma Street. There were a few houses on the far side, but back then it was pretty much all undeveloped land in between. A trail ran alongside the field and across a makeshift bridge made of boards over the creek – it was fun to ride our bikes down the hill on a hot day because the bottom of the little valley would always be cool. (Years later, they would build La Paloma Elementary School on this property, and bury the creek in a pipe below several feet of earth to build the playing field, and we would occasionally dare to crawl all the way through it – it was tall enough for us to be able to walk hunched over, and it was a long, dark, echoing walk. If mom knew, she’d a’ killed us.)

Dad had an old oxidized1960-something Ford F100 pickup that he’d put up on blocks in the back of the driveway when he went to Viet Nam, and we kids used to play on it. And then get in trouble for playing on it. Except the time mom filmed us playing on it while he wasn't home. Apparently she thought it was cute, but our dad had declared it strictly off-limits.

- another excerpt from my autobiography