On Becoming A Christian - My Testimony

I grew up in a pretty “non-religious” home.  My parents took my brothers and me to a Methodist church for Sunday School and church on Easter Sundays.  When I was about 8 through 12 they would take us each Sunday, but when I was about 12 they stopped taking us since (as they told me later) we were obviously not interested in going.  I should point out that they did not attend church either, but would drop us off when they did take us and pick us up after church.

I never gave God much thought throughout my childhood.  That said, I was a very moral guy growing up – rarely told lies, never cussed, didn’t smoke or drink, didn’t hang out with the wrong crowd, that sort of thing.  It wasn’t until I was in high school that I started thinking about “religion” in that I wondered what would happen if I died; where would I end up?  Was there really a heaven and a hell?  If so, I figured I was a really good person, so I was probably going to heaven.

As far as “religion” goes, I figured that if someone really wanted to be religious they would attend a Catholic church since they had so many “religious” traditions and prayers, icons and stuff.  But I didn’t want to be “religious” so I went to no church.

I remembered enough from my visits to Sunday School that I knew there was a God, and there was Jesus, and Jesus died on a cross, but that’s about it.  Didn’t know, or really care about, anything more than that.  After all, I was a good person.

My best female friend in high school, Julie, was a Christian.  She was always joyful, even when things weren’t going her way. And that was often – I was a good friend and listener and she often came to me with her problems.  She was always my “sister” and I was her “brother.”  I had a good shoulder.  But even though she had problems, there was still something about her – some kind of peace she had that I lacked.  And even though those problems bothered her, her speech was still abounding in “Praise God” and references to “Lord Jesus.”  Not in the over-dramatic way of some who just like to throw those kinds of words around, but to her they were real - real parts of her.

Well, like I said, she had a peace that I wanted to experience for myself, so one day I asked if I could come to her church the next Sunday.

She said sure, so that Sunday I showed up at the First Baptist Church in Fallbrook, California, not knowing what to expect.  She saw me and invited me to sit next to her and our friend Gary, so I did.  I listened to the message, for the first time in my life.  I went four more Sundays before it finally dawned on me that the reason Jesus suffered and died on the cross was because I was a sinner, no matter how much of a “goody two shoes” I was, and the end result of my sin would be an eternity in Hell.  Only perfection could save me, but there was no way I could be perfect.  But Jesus is perfect, and he took it upon Himself to pay, with his own life, for my sin by dying on that cross.  All I had to do was accept and admit the fact that I was a sinner, and accept His gift of sacrifice for my sins as payment in full for my sins.

That Sunday in November, 1974, I went forward and publicly acknowledged my acceptance of Jesus as my Savior.  Julie was surprised – she thought I had been a Christian all along.  It’s been said by others that accepting Christ is like having a weight lifted from one’s shoulders.  For me that was true. It was like a terrible weight – the weight of guilt – was lifted from my shoulders as I prayed for God’s forgiveness of my sins and praised and thanked Him for His sacrifice on my behalf.

Now, my mother, on the other hand, when I told her I had become a Christian, was not happy. "Don't you DARE mention that name in this house! And stop hanging around with that religious zealot Julie." That took me by quite a shock. I didn't learn until much later that her reaction was because her mother was Methodist and her father was Catholic, and she grew up in a house where arguments about religion were fairly common and full of wrath.

Outwardly there was perhaps very little change in me – I continued to be the same good person I had already been, but inside, that darkness in my heart was illuminated and I was saved.

Although there have been many trials and tribulations in my life since, I've always taken comfort in knowing that Jesus is my Savior and He loves me and will take care of me.

Julie went to be with the Lord when He called her home in January of 2011 following a year of wrestling with cancer. While I was saddened by her passing, I know that the joy in which she now lives far outweighs any she had experienced during her life her on earth.  Her memorial service presented a time of testimony for God and about how her life had impacted many lives for Christ.  I am honored and blessed to have been priviledged to know her. 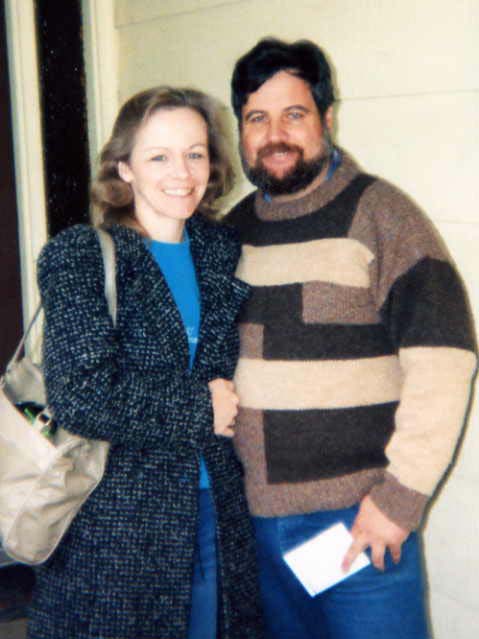