Of My Dad, Greyhounds and Diesel Exhaust

My father was a United States Marine.  But providing for a family of five required more money than he was making, so he took a part time job as a transit bus driver with what was then Oceanside Transit (which later became North County Transit District) in Oceanside, California.  He also took a temporary part time job as a night custodian at an elementary school.  No one could ever accuse my father of not having a good work ethic.

His choice to become a part-time bus driver established a career that bloomed when he retired from the USMC after 20 years of service.  He moved his way up the ranks from part time to full time driver, then dispatcher, then supervisor, retiring from that career in the mid 1990's.

He loved driving buses.  He'd always sign up for charters, and I recall riding in the seat behind him when he drove a chartered bus (IIRC, it was one of the company's GM "Fishbowl" buses; see this image search to see what they looked like -- I always thought they looked cool and streamlined and modern) to the Pasadena Rose Bowl one year when I was young.  His passion for driving was handed down to me; but instead of following in his footsteps to become a bus driver (other than being hired as a school bus driver one year - I loved driving those Crowns) my career path was in driving trucks. 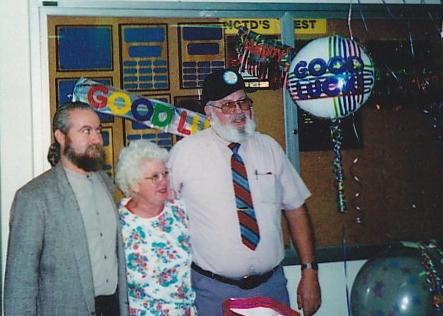 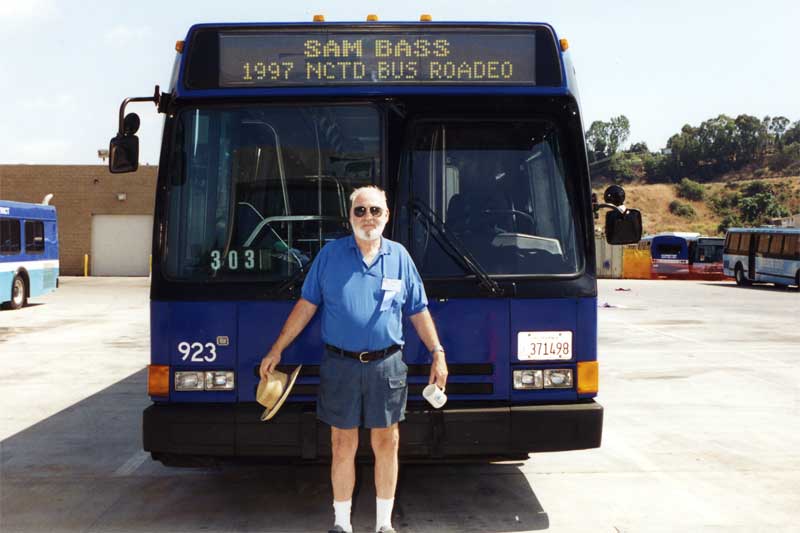 My dad also loved buses, not just driving them. Whenever we were on a road trip and he saw a Greyhound bus coming, he'd say something like "Here comes a dog, man" or something like that.  I don't recall the exact words.  His best friend was also a bus driver with a transit company in the Anaheim, California area.  There were times when we would be visiting with his friend and his family that the friend would take my dad and me to the bus barn out of which he worked.  Dad loved to check out the buses they had which were different from the ones he drove with Oceanside Transit.  There was one which he showed me that in order to get into reverse gear the driver had to hold down a button on a panel before putting the gearshift into first gear.  Unless you pushed and held that button, you'd only get first gear, not reverse.

I sat in the driver's seat of one of the buses one night when we were there while my dad and his friend stood in front of the bus chatting in the parking lot.  I don't recall how old I was, I just remember that the bus was a Crown, and that when I stood up to get out of the bus I accidentally stepped on the airhorn button, which was on the floor near my left foot.  They didn't appreciate being startled, but they took it well.

When that friend and his wife decided they wanted to move out of the city to a less urban area, my dad easily convinced him to move to the Carlsbad, California area and go to work driving for the transit company my dad worked for.

After my dad retired, he bought a new 1999 33ft. Hurricane motorhome with the dream of touring America. (I'm quite sure that his true dream would have been to buy a bus and have it converted to a motor home, but that was out of his financial range).  He hired a contractor to pour a concrete pad with utility hookups at the end of his driveway to on which to park the motorhome when it was home.  Unfortunately, his health began deteriorating before he could even get east of California.  My mom passed away in 1999, and dad ended up moving back to his home state of Oregon.

Sadly, he was only able to take a trip from Oregon back to visit family in southern California once, after marrying the first girl he ever kissed from back in his school days ... and he ended up in Scripps Memorial Hospital in Ja Jolla, California for triple bypass heart surgery. After his recovery, someone in our family drove him and his then-new wife back home to Oregon in the Hurricane, where he ended up having to sell the motorhome.

Dad passed away in 2012 after a long bout with End Stage Kidney failure and complications resulting from exposure to Agent Orange during his two tours in Vietnam as a United States Marine.

He passed his lifelong dream of traveling the USA in a motorhome to me.  I've not yet achieved that dream, although my wife and I purchased a 23 ft. Phoenix Cruiser mini-motorhome and have made two trips between Oregon and Arizona with it for medical appointments.  Maybe someday I can fulfill my dad's dream by proxy, the Good Lord willing.

My family would travel from southern California to northern Oregon every year for a week at Christmas time to share Christmas with mom or dad's family.  Usually, my dad would drive, pulling his 17' Nomad travel trailer behind his old International Travelall.  Though he loved to drive, there were times when he just couldn't get leave from the Marine Corps or vacation time from work.  It was those times when he would take us to the Greyhound depot in Oceanside and put the four of us (my mom, two brothers and me) on a bus for a round trip ride from Oceanside, California to Salem, Oregon. (Perhaps, if the bus transportation industry was like the railroad industry in that if you worked for any railroad you used to get comp tickets on passenger trains of your own railroad as well as those of most other lines - this was pre-Amtrak when each major railroad ran its own passenger trains - he may have gotten the tickets comped or at a discount, I don't know.)

I enjoyed the bus terminal sounds and the aroma of diesel exhaust and lube oil.

Speaking of diesel exhaust, I think Greyhounds back in those days must have burned a different grade of diesel fuel than trucks did.  I say that because getting behind a Greyhound bus on the highway was a pleasure to my smeller; it had a much "smoother" smell than diesel exhaust from semi trucks.  The engines in buses sounded smoother, too; perhaps most of that was because the engines were in the rear, although I can't see why that should make any difference.

But I digress, again.

The bus trips to Oregon and return were long, and probably uncomfortable for most people.  But I would revel in the views from the big tinted windows, watching the ever-changing scenery slide past as we cruised along the highways in air-ride comfort or watching the driver do the driving ("Go Greyhound, and Leave the Driving to Us!").

We made a lot of stops along the way; every little town seemed to have a Greyhound depot.  Or, if no actual depot, a sign saying "Greyhound Depot" or "Greyhound Bus Station" on a restaurant or grocery store or wherever. Interested in seeing some pictures? I give you DuckDuckGo's image search for "Greyhound Depot Sign"!

So, yeah, there were small depots and large terminals, where in some cases we would have to change to a different bus to continue our trip.  Sometimes the bus would stop for half an hour or so at some small town depot to allow the passengers a chance to stretch their legs (smoking was allowed on the buses back then) and get the kinks out of their road-weary bodies.  I enjoyed them all, but especially the big city terminals with large waiting rooms and an enclosed arrival/departure area where buses would nose into the parking spot and the smell of diesel exhaust and warm gear oil filled the atmosphere.

Greyhound bus drivers tended to push the envelope when it came to speed limits.  But I can think of only two speed-related incidents in our bus travels, and in perhaps only one of them was speed a factor.  In one, the bus was rounding a very long curve in the mountains north of Redding, California one night (back before Interstate 5, when the main north/south highway through California and Oregon was US99) and a deer decided to jump out in front of the bus.  I was awake and watching out the windshield at the time as small, random snowflakes kissed the windshield; the driver took his foot off the accelerator pedal but didn't swerve or brake (which is, after all, what you should do if you encounter an animal encroaching upon your path).  The deer ricocheted off the left corner of the front bumper, and the last I saw of it was as it spun off into the darkness beside the road.

In the other speed related incident, the bus got pulled over by a State Trooper as it left a tunnel while heading north on US58 in the Oregon Cascades. The Trooper had passed us and a truck we were following a few miles before the tunnel, and he had pulled over in a wide area next to the highway to wait for us and flagged both the truck and our bus to the shoulder.  Our driver got a ticket for speeding.

Hope you enjoyed the read.

In looking for a photo of my dad that would fit this article, I went through a file I have on my computer of photographs I scanned from his photo albums after he passed away. I couldn't help but be moved by the fact that he didn't value photos of scenery, buildings, places he'd been and the like; the photos he valued were of family; his wife, his children, his grandchildren. I miss you, dad.